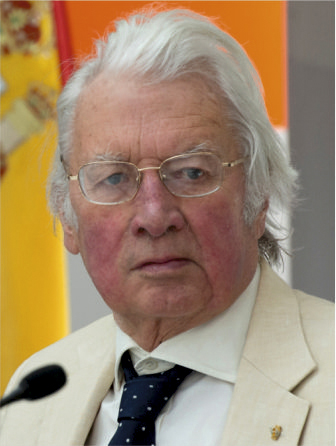 Hugh Thomas (Windsor, 1931) studied at Queen’s College, Cambridge and at the Sorbonne in Paris. He was a civil servant of the British Foreign Office and taught at the Royal Military Academy Sandhurst and at Reading University. In 1981 he became a life peer as Lord Thomas of Swynnerton. Prominent among his works are Cuba, or the Pursuit of Freedom (1971),  La formación de Hernán Cortés (1992), The Conquest of Mexico (1993) I, Montezuma (1995), The Slave Trade: History of the Atlantic Slave Trade 1440–1870 (1998), The Revolution on Balance (1999), Rivers of Gold (2003), Eduardo Barreiros and the Recovery of Spain (2007), The Golden Age: The Spanish Empire of Charles V (2010) and World Without End: The Global Empire of Philip II (2013).