Carmen Sanz Ayán has been awarded the National History Prize 2014 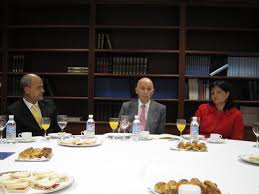 Carmen Sanz Ayán has been awarded the National History Prize 2014 for her work Los banqueros y la crisis de la Monarquía Hispánica de 1640. She was granted a special degree award (1984) and special PhD award (1988), and is professor of Modern History at the Universidad Complutense in Madrid and a permanent member of the Real Academia de la Historia, where she delivered her inaugural lecture on Pedagogía de Reyes: el teatro palaciego en el reinado de Carlos II. She was shortlisted for the National History Prize (1990) and received the Ortega y Gasset Essay and Humanities Award (1993). Her research has given rise, among other studies, to Los banqueros de Carlos II (1988), Estado, monarquía y finanzas en tiempos de los Austrias (2004) and Hacer escena. Historia de la empresa teatral en el Siglo de Oro (2013). Her main lines of research focus on the financial networks that operated in Europe during the Modern Age and on analysing the socioeconomic aspects of Baroque theatre and the political history of the second half of the 1600s and early 1700s.

She is a member of the advisory committee for the Los Hombres del Rey collection that is published jointly by the CEEH and Marcial Pons and prefaced the book La Casa de Silva y los duques de Pastrana (Antonio Terrasa Lozano, 2012). She was also involved in the books Felipe IV. El hombre y el reinado and Carlos II. El rey y su entorno cortesano belonging to the Los Austrias collection.

We at the CEEH wish to congratulate her on winning the prize and are proud to have her as one of our authors and as an advisor for our collections.