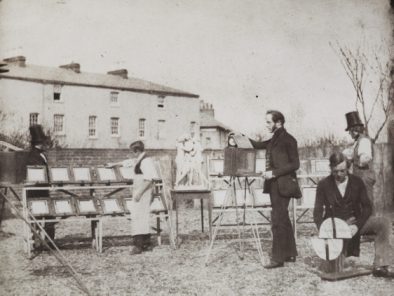 Annals of the Artists of Spain was the first book in the history of Spanish art that was organised chronologically and the first in the world to include photographs. It was published by the Scottish collector and Hispanist, William Stirling Maxwell. The work was conceived in four volumes. The first three, featuring texts by Stirling, were published in 1848, whilst the fourth was a supplement of illustrations of which only 50 copies were published for friends, family members, collaborators, collectors and libraries. Of these, only 25 remain.

With this book Spanish art achieved a certain degree of awareness abroad, given that works by 16th and 17th century artists were reproduced, in addition to works by Goya. It brought together a total of 68 photographs created by Nicolaas Henneman under Stirling’s supervision. The photographic process employed for the book was the talbotype. This technique determined that shots were taken outside and the copies made also in the sun.

Within the framework of the PHotoEspaña Festival, the Museo del Prado, in collaboration with the Centro de Estudios Europa Hispánica and the National Media Museum (Bradford, England), presents the exhibition Copied by the Sun, which brings together for the first time the various materials that Stirling employed in creating the book, as well as information regarding the background events surrounding the project, workshop proofs of Henneman’s talbotypes and models that were used to create the images (sculptures, drawings, engravings and books).