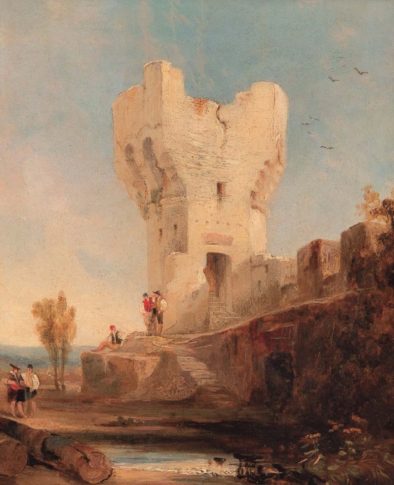 The Scottish landscape painter David Roberts (1796–1864) and the Galician artist Genaro Pérez Villaamil (1807–1854) were giants in the topographical art of the Romantic era. Between them they generated several hundred views of landscapes and monuments in Spain – castles, cathedrals, convents, palaces – often with a flavour of local traditional life. Fully versed in the aesthetic conventions of the Picturesque and the Sublime, Roberts and Villaamil created a Romantic image of Spain in the nineteenth century, one that still colours perceptions of the country today.

Roberts’s impact on Villaamil has long been noted by art historians but never before examined in detail. This exhibition offers new perspectives on the artistic dialogue between the two artists in the context of the cultural discovery of Spain, North Africa and the Near East by artist-travellers. Bringing together over 100 paintings, drawings, prints, and objects, the exhibition starts with Roberts’ and Villaamil’s first encounter in Seville in the summer of 1833, which changed Villaamil’s approach to landscape painting. It ends with their separate responses to the changing worlds of their respective countries nearly twenty years later.

The exhibition reveals similarities in themes, styles, and media between the two artists, but it also uncovers vital differences in their imaginative responses to everyday life, religion, landscape, history, and the architecture of Spain. Roberts, a Presbyterian Scot, presented Spain as a timeless exotic nation, different from his own. Villaamil shared Roberts’ fascination with the Alhambra in Granada, the Mosque-Cathedral in Cordoba and the Giralda in Seville, but he also shifted attention to central and northern parts of Spain, projecting a patriotic view of the country as a Christian, Catholic and ultimately modern nation.

If the Peninsular War and Romantic literature had secured Spain a place in the Western popular imagination in the early nineteenth century, the proliferation of illustrated travelogues with views of monuments and landscapes gave Spain a visual identity and turned it into a new tourist destination. Both Roberts and Villaamil were involved in ambitious publishing projects which played a significant part in this process. The exhibition therefore includes a wide selection of lithographs and engravings from their works, revealing how they popularised their artistic visions of Spain.

The exhibition features key works from Spanish and British private and public collections, such as the National Galleries of Scotland, Tate Britain, the Victoria and Albert Museum, the Prado Museum, the Patrimonio Nacional and others. Many works have never been exhibited in Spain before, among them Roberts’ magnificent views of Seville Cathedral, painted in Seville in 1833, which are on loan from Downside Abbey, UK.