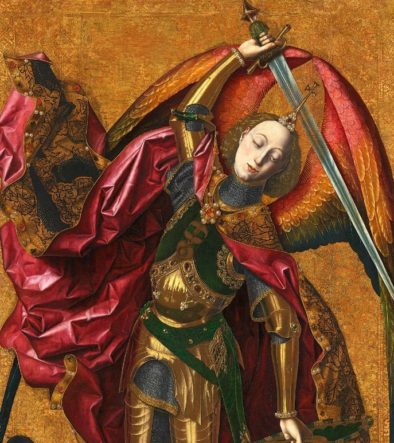 From the glimmer of a jewel to the sheen of armour, Bermejo’s ability to capture light, colours and textures in oil painting was unparalleled in 15th-century Spain. Though fewer than 20 works by the artist are known and much of his life remains something of a mystery, Bermejo’s paintings set him apart as a technically skilled and visionary master.

Bringing together seven of his rare works, six of which have never been seen in the UK, this exhibition explores how Bermejo drew inspiration from Netherlandish painting, using illusionistic effects and a rich colour palette, to become one of the greatest artists of the Spanish Renaissance.

At the heart of the exhibition is Saint Michael Triumphs over the Devil, widely considered the most important early Spanish painting in Britain, its technical skill and excellent state of preservation even clearer following its recent year-long conservation treatment.

This will be a unique opportunity to see Bermejo’s first documented painting, Saint Michael (1468), alongside his last, the recently restored Desplà Pietà (1490) from Barcelona Cathedral, which has never been lent outside of Spain until now. Also on display will be Bermejo’s only other signed masterwork, the Triptych of the Virgin of Montserrat (probably 1470–75) from the Cattedrale Nostra Signora Assunta in Acqui Terme, Alessandria (Italy). Two panels from Barcelona complete this exhibition: Descent of Christ into Limbo (MNAC) and Christ with the Just in Paradise (Institut Amatller d’Art Hispànic).

The publication accompanying this exhibition has been supported by the CEEH.