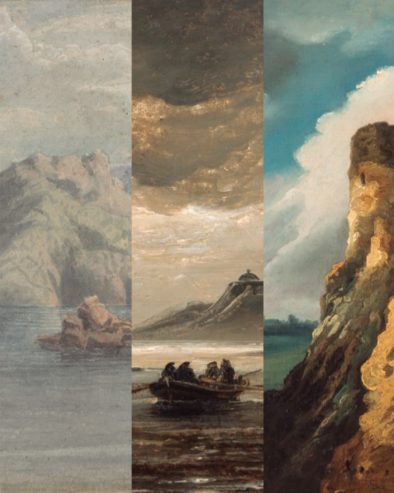 This exhibition and its accompanying catalogue bring together works by three Romantic artists – two of them Norwegian and one Spanish – who, despite having no contact, practised almost simultaneously a type of landscape painting that stemmed more from their inner visions than from faithful imitation of nature. As members of an international trend based on the aesthetic ideal of the sublime, Balke, Hertervig and Lucas used experimental or uncommon techniques to disintegrate and manipulate forms, capturing innovative mental landscapes that verge on modern abstraction.

Eugenio Lucas (1817‒1870) achieved widespread recognition on the Spanish art scene of his day and his multifaceted oeuvre – Goyesque, scenes of everyday life and landscapes – was shown in several countries on the initiative of José Lázaro Galdiano, his main collector. In contrast, both Peder Balke (1804‒1887) and Lars Hertervig (1830‒1902) were enigmatic figures, largely marginalised and long overlooked by art historians and Norwegian institutions until their gradual revival throughout the twentieth century. The aim in bringing together their imaginings is to avoid a merely regional approach that would show them to be rare cases or isolated incidents and limit viewers’ appreciation of them. Instead, the idea is to draw attention to the similarities in their way of drawing and painting, which was shared by other contemporaries of theirs such as J. M. W. Turner (1775‒1851) and Victor Hugo (1802‒1885), together with whom they shaped a Europewide artistic phenomenon.

The exploration of these international parallels has been made possible by the collaboration of the Museo Lázaro Galdiano in Madrid, the Gundersen Collection in Oslo and the Stavanger Kunstmuseum, which respectively own a large number of works by each of these artists and have enabled them to be shown in Spain or in Norway for the first time. The idea of the two exhibition venues has been promoted by the CEEH and the Nordic Institute of Art (NIA), partners in this project.